Do you need reliable dash cams that can record the front and rear?

If so, you’ll be getting more than you bargained for with the top-10 front and rear dash cams below. Many of them are packed with high-grade tech equipment that will make keeping your car safe easier than ever.

Let’s start with a table of the products.

VANTRUE’s dash cam comes with various sensors that detect motion inside the car, as well as at the front at the same time. It uses high-tech CPU and Sony Exmore IMX323 sensors to capture images simultaneously.

There are also four infrared LED lights that help to capture higher quality images in low-light settings for safer driving at night.

You can also make use of the motion activated parking mode that operates 24 hours. It records automatically when there is any motion around the car. The auto-start feature also works when you turn the vehicle on.

There’s even a built-in microphone for recording audio too.

This dash cam is designed to be purposefully discreet so that people don’t notice it easily. You can choose to record between two different viewpoints by using both the rear and front cameras that are included.

Everything recorded is in 1080p HD and the cameras can pick up images from a long distance. Not to mention, it can also be adjusted accordingly to different light settings with the exposure settings.

A special g-sensor detects when collisions happen and ensures the camera records and remains securely in place to capture all the footage. Footage during this time will also not be overwritten by new recordings.

The design is discreet to ensure people don’t even notice it’s there. They can rotate up to 180 degrees and use a wide-angled lens to capture as much as possible, on the inside, and outside.

Emergency recording automatically kicks in during accidents. This ensures the footage from that situation is prioritised and cannot be overridden by new recordings. 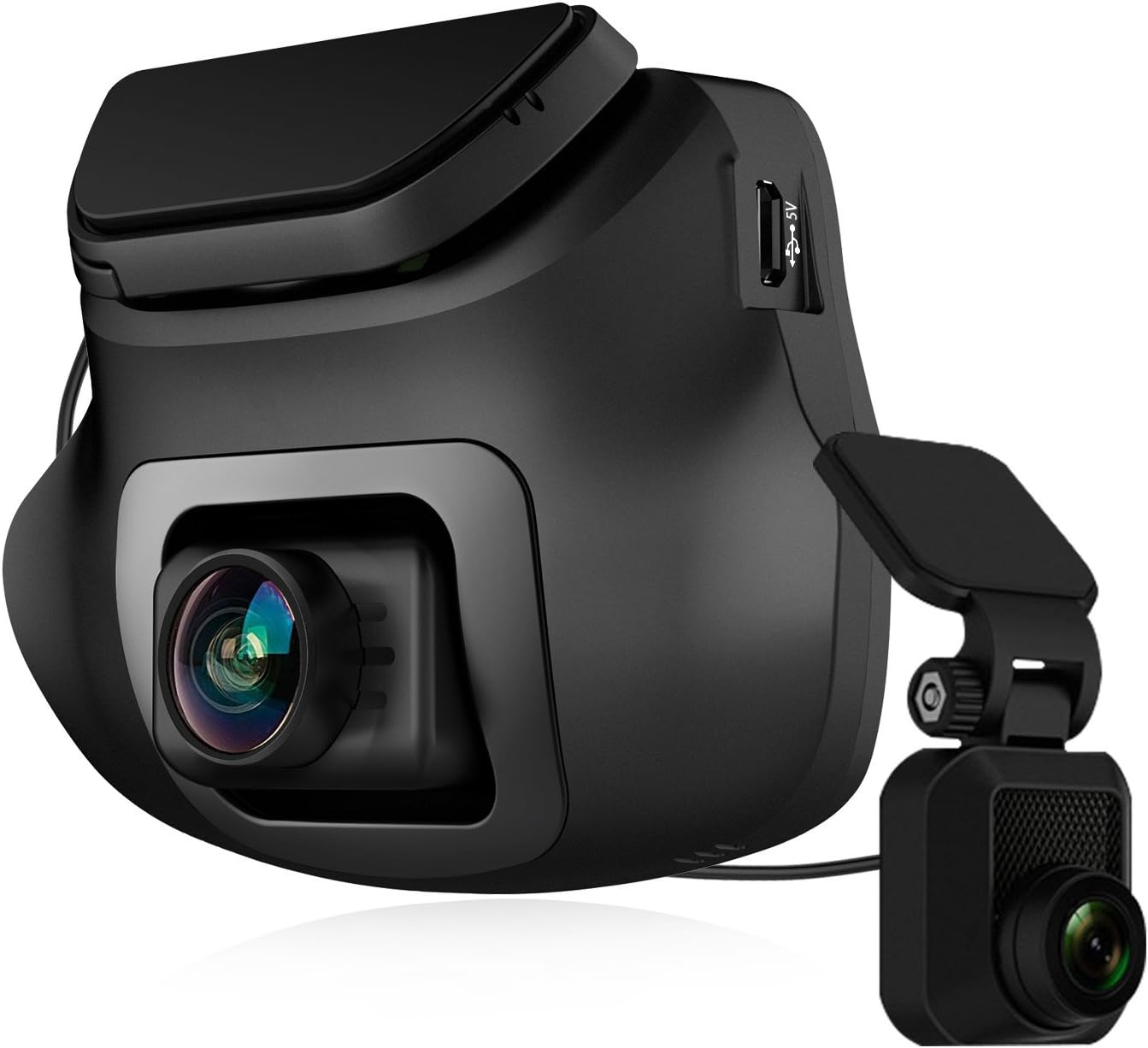 Dual lenses record HD footage from both the back and front simultaneously. The angles can be easily adjusted upwards or downwards and can be installed hassle-free as they stick right onto the windshield.

The 150-degree angles mean you capture a lot of the area around the car. These cameras can record for 30 minutes without any power with the 450mAh batteries.

Tech is included that deals with exposure settings in low light settings. You also benefit from the automatic recording feature too. The cams turn on as soon as the car is turned on. Furthermore, the g-sensor and an accelerometer detect motion and collisions and make those recordings priority.

The Sony Exmor sensors in the front and rear cameras record 1080p quality video. You are able to record a large perspective around you with the wide-angle lenses. This effectively monitors movement 152 degrees behind you and 170 degrees in front.

Footage of collisions is automatically recorded and cannot be written over by new footage.

Both the cams use supercapacitors to ensure they can withstand extreme cold and heat temperatures better. This increases their lifetime compared to other dashcams.

Lastly, there are sticker mounts for both cams to make for easy installation.

Two cams work simultaneously to record HD footage from the front and rear. You can see these recordings on a large 4” display screen that can easily be stuck onto your windshield. It can be adjusted upwards or downwards with ease too.

When you turn the ignition on, the cams turn on automatically. The accelerometer and g-sensor work to pick up on collisions and movement. Anything recorded during this period cannot be overridden by any new recordings.

You can also select a parking mode with keeps your vehicle under surveillance 24 hours a day.

Both front and back cams record in HD. The g-sensor makes sure to record any accidents which cannot be replaced by any other footage, meaning it can be saved easily for evidence.

The wide-angle lenses record at 150 degrees around and are able to pick up on blind spots effectively.

The dash cams turn on automatically in certain cases, even when the car isn’t on. These cases would be when there is a collision or contact detected on the vehicle.

You can feel safer driving at night with the wide dynamic range tech. It minimizes large amounts of light exposure to ensure high picture quality.

Furthermore, there are infrared night vision features that use four LED lights to make for safer night time drives.

Rexing have created two cams that can connect to Google Maps for GPS route tracking. They also record in 1920x1080p HD for detailed footage. The design of both cams is discreet, so no one notices them.

A g-sensor works as a tool to detect accidents. It automatically records the situation and ensures that all the important footage from that time is saved.

For a peace of mind, customers also receive an 18-month warranty too.

APEMAN’s front and rear dash cams record in full 1080p and 720p HD. The rear cam is waterproof and means you can record everything going on around the car at the same time.

An equipped g-sensor works to record and save footage from collisions automatically. Therefore, important recordings that can be used as evidence are saved no matter what.

You can also benefit from the GPS connectivity that lets you keep an eye on where your vehicle is easily. The design is also very compact to ensure it doesn’t take up a lot of room on the windshield and distract from driving.

This also works to ensure they remain discreet from people outside the car.

Veckle’s front and rear cams both record in full 1080p HD. They both use wide-angle lenses to capture footage all around the car.

The Eximious Night Vision features mean it can record clear footage at night for safer driving.

If there’s an accident, you don’t have to be worried about the footage being overwritten by new recordings. There is an automatic feature that turns on during collisions to ensure that footage is saved for evidence purposes.

Hopefully, we’ve given you a good idea of what the best front and rear dash cams on the market have to offer. Take into account all their features, as well as the cons, that we have detailed above – they’ll help you pick the best one for you.

More articles on this category